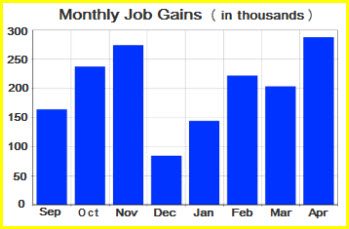 The major economic data released this week continued to show an even better than expected bounce back from a weather-related slowdown during the winter. Despite the economic strength, though, there were few signs of inflationary pressures, helping mortgage rates end the week lower, near the best levels of the year.

The economy added 288K jobs in April, far more than expected, and the largest monthly increase since January 2012. Average job gains over the last three months were a healthy 238K, up from 167K over the prior three months. The Unemployment Rate unexpectedly dropped from 6.7% to 6.3%, the lowest level since September 2008. Looking below the surface, though, a large part of the decline in the Unemployment Rate was due to people leaving the labor force. Average Hourly Earnings, a proxy for wage growth, were flat, limiting the upward pressure on inflation.

The impact of unusually severe winter weather appears to have taken an even bigger bite out of economic activity during the first three months of this year than what had been expected. The initial reading for first quarter Gross Domestic Product (GDP), the broadest measure of economic growth, was just 0.1%, down from 2.6% during the fourth quarter. This report often receives large revisions, though, as more data is collected.

With Mortgage Rates Climbing, Now’s the Time To Act
January 20, 2022

Sellers: Don’t Wait Until Spring To Make Your Move
January 19, 2022

Achieving the Dream of Homeownership
January 18, 2022

When Is the Right Time To Sell [INFOGRAPHIC]
January 15, 2022
Go to Top
Skip to content